You are here: Breakfast & Brunch

Colorful heirloom tomatoes, gruyere cheese, and fresh asparagus are the key players in this quiche. Having family over for a special occasion? Impress them with this special breakfast that you can prepare the night before. Enjoy! 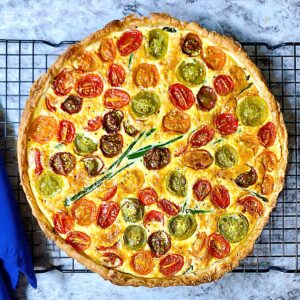 Did you make our recipe?

Our family enjoys creating delicious meals with healthy ingredients that can be shared by many. Our goal is to provide simple, elegant dish ideas for weeknight dinners or entertaining guests. Many of the recipes on our website have been passed down from family and friends. We hope you are inspired to do the same.

Hi, I'm Jami! I'm a full-time teacher who enjoys cooking as a hobby. When I'm not inspiring young minds, you can find me at local fresh markets, in the kitchen, or having dinner with family and friends. Every dish on this site was created in my home. ♥️

This website uses cookies to improve your experience while you navigate through the website. Out of these cookies, the cookies that are categorized as necessary are stored on your browser as they are essential for the working of basic functionalities of the website. We also use third-party cookies that help us analyze and understand how you use this website. These cookies will be stored in your browser only with your consent. You also have the option to opt-out of these cookies. But opting out of some of these cookies may have an effect on your browsing experience.
Necessary Always Enabled
Necessary cookies are absolutely essential for the website to function properly. This category only includes cookies that ensures basic functionalities and security features of the website. These cookies do not store any personal information.
Non-necessary
Any cookies that may not be particularly necessary for the website to function and is used specifically to collect user personal data via analytics, ads, other embedded contents are termed as non-necessary cookies. It is mandatory to procure user consent prior to running these cookies on your website.
SAVE & ACCEPT